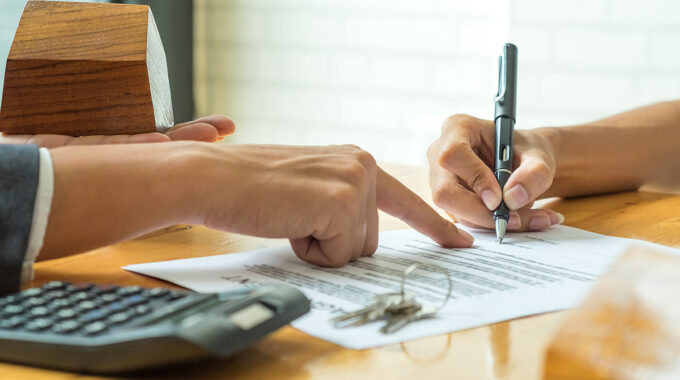 Mortgage Assumption Agreement is a contract by which a potential buyer of a property may take over an existing mortgage on the property rather than securing their own financing. Technically, all mortgages are potentially assumable; however, most lenders, especially those of conventional loans with Private Mortgage Insurance, try to prevent the assumption of a mortgage with a due on sale clause within the note. Mortgages guaranteed by Federal Housing Authority (FHA), Veterans Administration (VA) or United States Department of Agriculture (USDA) are irrefutably assumable. In spite of the due on sale clause, assumptions are explicitly allowable on certain mortgages based on the Garn–St Germain Depository Institutions Act of 1982. The most common cause of this is when a title transfers to a new owner after death or divorce through assumption.

There are two types of assumptions: Qualified Assumptions and Name Change and Title Transfer Requests.

Qualified Assumptions are those where the assumer of the mortgage needs to qualify for the loan they wish to assume. The process is similar to the issuance of a purchase mortgage. A qualified assumption may allow the release of liability of the original note holder subject to the new borrower’s ability to meet the lender’s qualifying criteria.

The assumption process of an FHA loan is dependent on the origination date of the loan. For FHA loans that were originated before December 1, 1986 a potential buyer may assume the loan as-is without having to re-qualify. However, if the loan originated after that date, it falls in the category of “Credit Worthiness Assumption Process” which means that the potential buyer must re-qualify for a new FHA loan based on current loan approval criteria. One caveat to this rule is that FHA mortgages executed between 1986 to 1989 contain language that is unenforceable due to later Congressional action. According to guidance from FHA these loans are also freely assumable, despite any restrictions to assumability as stated in the mortgage.

The qualified lender must determine the creditworthiness of the borrower wishing to assume the loan per FHA standard mortgage credit analysis requirements. A Direct Endorsement (DE) lender, and their DE certified underwriters can act as an approved authorized agent to process assumptions. Alternately, supervisory lenders with an approved authorized agent relationship may authorize their DE underwriters to credit qualify the new borrower. The FHA requires that the assuming borrower pay down the outstanding mortgage balance to a 75 percent loan-to-value (LTV) ratio if the current owner-occupant requires a release of liability off the mortgage.

Veterans Administration loan assumptions require the new borrower to re-qualify for the loan if was when origination occurred after March 1, 1988. Also, the original owner or the buyer must pay 0.5 percent of the existing principal balance as a funding fee to VA for processing the assumption.

According to VA Pamphlet 26-7, loan servicers with automatic authority are authorized to process and determine creditworthiness on assumption approval requests on behalf of VA. The VA underwriting guidelines must be followed per the VA lenders handbook, the same as a new purchase money mortgage. At the conclusion of the assumption, the servicer must electronically notify the VA of the authorized ownership transfer and approve the release of liability. Servicers without automatic authority servicing loans for holders with automatic authority must advise the holders of the assumption approval requests and the holder is responsible for the qualification process. If neither the servicer nor the holder has automatic authority, the servicer must ask for a complete credit package from the borrower. The package is then submitted, along with the purchase contract and the status of the loan, to the loan production center at the VA regional loan center for underwriting and approval.

In limited cases, the USDA will allow an assumption of the existing note’s terms, including the same rate and term assumption. Further, the purchaser does not have to qualify and prove income eligibility, creditworthiness, or ability to repay the loan.

In conclusion, the major driving force that will make assumptions popular again is the rising interest rate environment. New borrowers may want to assume the existing mortgage with more favorable rates and terms than what they can qualify for with a new loan. Servicers, lenders, and mortgage holders must be prepared to tackle loan assumption requests efficiently as volumes of these requests increase.

Chetan Patel – is a Mortgage Banker with 20+ years of experience in operations and senior technology with mortgage lenders and outsourcing companies.  He is a serial entrepreneur with a track record of building several highly successful outsourcing and technology ventures in the mortgage banking and financial services spaces.

by Tom Wells During these highly unusual times with COVID 19, there are unique credit…

It’s a Great Time for Training

by Tom Hughes Dad, why does it take six weeks to close a home loan?…

If you would like more information about our services and what we can do for your business, please click here.